FROM THE NETWORK: Culture, Nature, Tourism, the Strategic Committee of local authorities traces the program 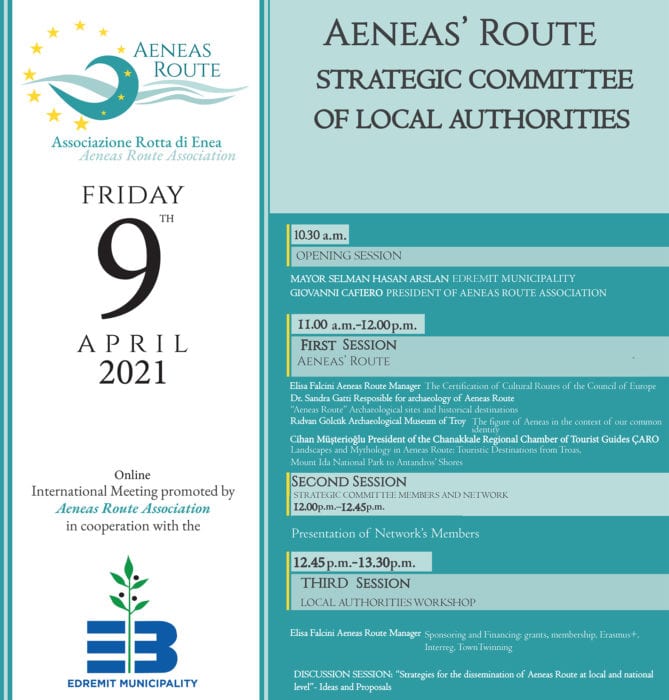 The places of the route of Aeneas in Turkey, the starting point of the journey of the Trojan hero and the cities and local administrations involved in the mythical journey were the protagonists of the first meeting of the Strategic Committee of the Local Authorities of the Route of Aeneas that took place on April 9th.
The meeting was virtually hosted and moderated by the Municipality of Edremit (Turkey), founding member of Aeneas Route Association. After the welcome message from the Mayor of Edremit Selman Hasan Arslan and the greetings of the President of the Aeneas Route Association, Giovanni Cafiero, the introduction to the myth of Aeneas from the historical and mythological point provided by Sandra Gatti, responsible archaeology of the Aeneas Route, was followed by the intervention of the director of the Archaeological Museum of Troy, Rıdvan Gölcük, who underlined the appearance of the figure of Aeneas as the “founder” and “father” of Europe, recalling the recurring role of the Trojan hero in the stories telling the descendant of many and diverse European peoples.
Also significant is the reference to the concept of “cultural diplomacy”, the tool, according to the director of Troy, which will allow the nations and peoples of the Route to overcome conflicts and historical differences in the name of a common cultural heritage which is the basis of our identity.
The president of the Regional Chamber of Tourist Guides of Çanakkale, Cihan Müşterioğlu, accompanied the participants of the meeting on a fascinating virtual journey through the naturalistic and trekking paths of the Mount Ida National Park, whose botanical richness and the unchanged ancient panoramas from which the gods of Olympus observed the bloody battles in the esplanade of Troy, offering themselves to the eyes of visitors in their unchanged and ancient beauty.
Natural, thermal and gastronomic tourism are also the priority of the Development Agency of the Southern Region of Marmara, another very important Turkish partner of the Route of Aeneas, which contributed to the meeting by promoting the collaboration of the committee members in supporting the candidacy of the region of Balıkesir (formerly EDEN destination) to “UNESCO, city of Gastronomy”.

The second session of the meeting, dedicated to the cities and local administrations that are members of the committee, was characterized by numerous presentations that contributed to the mutual knowledge of local actors by deepening the thematic and legendary context that binds every single city to Aeneas’ journey. The session was also characterized by new twinning proposals, in particular the Municipality of Mykonos with the city of Pozzuoli, which respectively host the two “Apollonian oracles” consulted by the Trojan hero, in Delos and Cuma. The need, in fact, to strengthen the ties between the “cities of Aeneas” and in particular between the various local communities can be enhanced through town twinning activities that can foster stable and lasting exchanges and friendships between citizens and young people from cities of different nations.
Numerous proposals presented by the intervening Municipalities: the Municipality of Gaeta has already planned concert and seminar initiatives for the summer of 2021, the Municipalities of Monte di Procida, with Pozzuoli, Bacoli, Quarto, Procida, Benevento, Centola Palinuro have given life to a regional cooperative system similar to that which has been created in Turkey in the Troas region. The adhesion to the network was also expressed by the Municipalities of Cerveteri (UNESCO City) and by the Sicilian Region. Carthage underlined the importance of the Committee to support the action of local authorities in their respective national contexts. Dr. Antea Leka from the Albanian Ministry of Culture participated in the session as an observer in view of upcoming activities to be organized in the National Park of Butrint, a UNESCO site located in the Municipality of Saranda, member of the network since 2020.

The creation of Aeneas’ Passport, where to register the visits to the sites of the European Cultural Route, Exhibitions of figurative arts and photography inspired by the Mediterranean landscapes of the Route, Seminars and events dedicated to Mediterranean gastronomy and diet, the virtual exhibition on the Tradition of ancient navigation in the Mediterranean, the communication event called Cruise of Values, in which a relay of boats leads along the itinerary the European values, the promotion of musical events linked to Mediterranean musical traditions (rembetiko, pizzica, taranta …), to Baroque music and contemporary sounds; theatrical events and performances in the sites of the Route of Aeneas, the realization of the International Festival of the Route of Aeneas in Cuma and in the Bay of Naples.
The conclusions of the meeting were entrusted to the Vice President of the Rotta di Enea Association, Tamer Acar and to Barbara Toce, Vice President of the Congress of Local and Regional Authorities of the Council of Europe. Both stressed the importance of the network to enhance and create new consortia for joint projects that can foster growth not only of the Route but also of the skills and experiences of individual members. Barbara Toce also recalled the relevance of the path that the Strategic Committee of the Local Authorities of the Route of Aeneas is undertaking in the mobilization of local authorities in the management and enhancement of the local cultural heritage of the five Mediterranean countries that make up the route with the priorities of the Steering Committee for Culture, Heritage and Landscape (CDCPP) of the Council of Europe.