The Aeneas Route, the journey between archeology and nature becomes a cultural itinerary certified by the Council of Europe 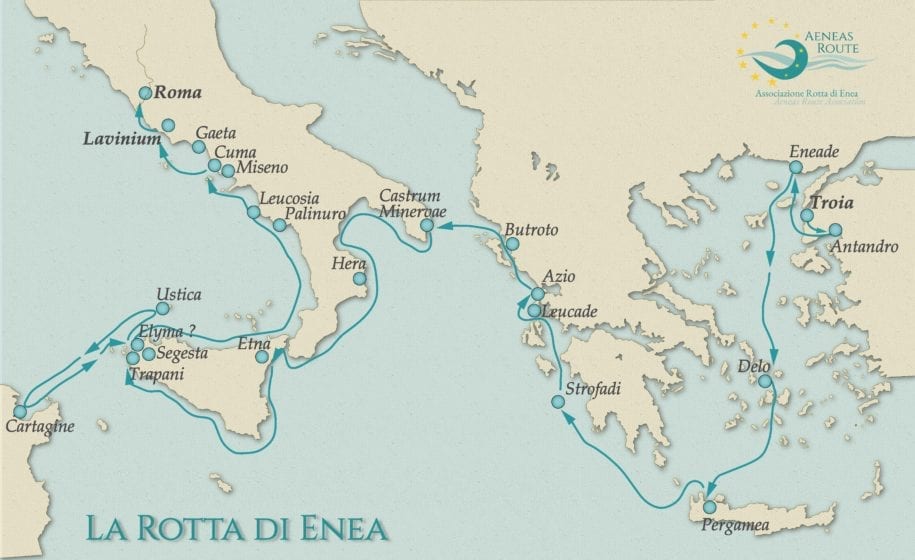 The mythical journey of the Trojan hero narrated by Virgil has been declared as the 45th cultural itinerary recognised at European level. Thefirst one, the Camino de Santiago was recognised in 1987. Aeneas Route crosses 5 Mediterranean countries (Turkey, Greece, Albania, Tunisia and Italy) on a route that in Italy involves 6 Regions: Puglia, Sicily, Calabria, Campania and Lazio.

Rome, May 21 – Aeneas Route, the mythical journey of the Trojan hero narrated by Virgil starting from the city of Troy up to the Lazio coasts, through 5 countries, has officially entered among the itineraries certified by the Council of Europe. In this way, the certified cultural routes of the Council of Europe reaches the total amount of 45 itineraries (the first was the Camino de Santiago in 1987) which invite European citizens to discover a heritage consisting of archaeological, religious, artistic testimonies and sites of naturalistic value. The certification of the Council of Europe is issued to networks that promote shared European culture, history and memory. These routes must also embody and disseminate some fundamental values promoted by the Council of Europe such as democracy, human rights, intercultural exchanges. Aeneas Route which crosses the Mediterranean landscapes, was promoted in 2018 by Aeneas Route Association, in collaboration with the Municipality of Edremit (Turkey), with the Lavinium foundation (Italy) and with numerous organisations and institutions at an international level.

“The unanimous decision to recognise to the Aeneas Route the certification of the Council of Europe – declared Giovanni Cafiero, president of the Aeneas Route Association – rewards over three years of work by our Association that has managed to create an enlarged network of members and supporters, thanks to the commitment of the volunteers who shared with us their great competence and passion. The Route of Aeneas today unites the shores of Turkey, Greece, Tunisia, Albania and Italy with their territories that symbolise the richness of European identity. It can promote a revival of tourism and economic and cultural exchanges as an opportunity for knowledge, encounter, consolidation of European and universal values, enhancing the richness of diversity“.

Aeneas Route is the first tourist-archaeological-maritime itinerary that starting from Turkey arrives in Europe according to the map of the route described in the Aeneid of Virgil. It has a precise geographical connotation and a rich storytelling linked all the stopoversof the journey up to the arrival in Rome. It involves Turkey, Greece, Albania, Tunisia and Italy with a path composed of 21 main stopovers.

The itinerary starts from Troy to get to Rome crossing 5 Mediterranean countries: Turkey, Greece, Albania, Tunisia and Italy. The route is composed of 21 main stopovers comprehending 6 Unesco Sites (Troia, Delos, Butrint, Mount Etna, Carthage, Cilento Park and Vallo di Diano), 3 National Parks (Mount Ida in Turkey, Butrint National Park in Albania and the Cilento National Park and Vallo di Diano in Italy on the Tyrrhenian coast), ending in the metropolitan area of Rome, a city that symbolises the Mediterranean community and the European Union since the 1956 Treaties of Rome. In Italy Aeneas Route crosses 5 regions : Apulia, Sicily, Calabria, Campania and Lazio.
The main sites that compose the tourist-archaeological-cultural itinerary of Aeneas Route are: Troy, Antandros and the National Park of Mount Ida, Ainos-Enez (Turkey), Delos, Crete and Lefkada (Greece), Butrint (Albania), Castro (Puglia), Crotone-Hera Lacinia (Calabria), Trapani-Erice-Segesta (Sicily), Carthage (Tunisia), Palinuro and Cuma-Pozzuoli, (Campania), Gaeta and Lavinium (Lazio) and the city of Rome, where Aeneas meets Evander, the king of the village on the Palatine. Aeneas Route involves the central-eastern Mediterranean basin, all the regions of the continental South and Sicily, displaying itself as a project for the revival of the culture and economy of the sea and in particular as an overall strategy for the enhancement of the archaeological/ landscape heritage and the quality productions of the entire coast of Italy and southern Italy.