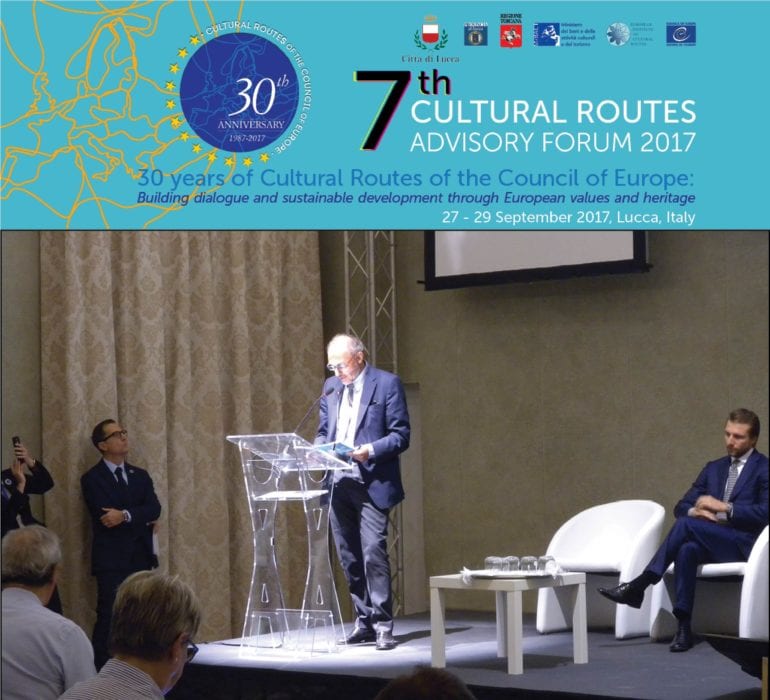 by Giovanni Cafiero – President of Aeneas Route Association
Our idea of proposing a new European cultural itinerary dates back to 2017. In May I was asked by the Municipality of Edremit to speak about the “Archaeological and Naturalistic Park of Lavinium” project, a perspective shared by the Ministry of Cultural Heritage, Superintendence of the Metropolitan Area of Rome. In September the new Itinerary was illustrated during a session on the new Cultural Routes at the international meeting of Lucca, CULTURAL ROUTES OF THE COUNCIL OF EUROPE, 30TH ANNIVERSARY (1987-2017) – 7THADVISORYFORUM.
Before the Council of Europe we presented our project of an archaeological and maritime itinerary crossing the Mediterranean from east to west. This took place exactly 30 years after the first European cultural itinerary was certified, the Camino de Santiago (also known as Way of St. James)
I illustrated our project by speaking of Aeneas as a father of European civilization. The Roman world by venerating Aeneas had linked itself to the literary and epic topos of the war of wars, that is, the Trojan war, and had chosen a “foreigner”, a demigod who came to Lazio from the coasts of Turkey, as its father. Aeneas was an exile, one who fled from a burning city and had lost almost everything, except for devotion to his origins and traditions, tenacity in taking care of his elderly father Anchises and the fortitude to go on and found a new city. This was a city meant to live in peace and ensure a future for Aeneas’ son Ascanio and the descendants of the Trojan lineage. But before founding the new Troy, Aeneas feeds and is fed by the civilizations of the Mediterranean Sea. Aeneas would not have landed on the coast of Lazio without the help of Dido, an immense figure and queen of Chartage, or Creusa, Aeneas’ first wife, who convinces him to leave and dissuades him from pursuing a sterile revenge in the dark night of Troy’s fire. Throughout his whole journey, the attentive gaze of Venus rests on Aeneas and the goddess’s power is put to use for his protection. One could not ask more of a poem which is a product of its times. While women are sacrificial victims and speak the voice of pain in Homer’s work and later in Euripides’ Trojans, they are conscious architects of the future in Virgil’s poem.
Aeneas comes back and talks to us in troubled times: for instance, after the Second World War, when the English poet and Nobel laureate T.S. Elliot defined the Aeneid as the European poem par excellence (London 1944); but also today, when the journey through the pain and grief caused by the pandemic pushes us to hold tight to our affections and common values so as to find the strength to start again, but only after honoring and remembering those who are no longer here, just like Aeneas did before leaving for Lazio, burying Anchises on the coast of Trapani and celebrating games and a spectacular regatta in his honor.
But let’s go back to Troy and the tale of the exiles. In that dark, terrible night in Troy “a star, through the darkness, slid from the sky, and flew, trailing fire, in a burst of light. We watched it glide over the highest rooftops, and bury its brightness, and the sign of its passage, in the forests of Mount Ida” (Aeneid II, 693-696, trans. by A.S. Kline)
A matter of leaving behind death and destruction, sailing towards an unknown destination where we can regenerate our values, our institutions, our culture, in the name of mixture, peaceful coexistence, human solidarity and respectful and fruitful encounter, upholding diversity and favoring economic as well as civil progress.
The Way of our new cultural itinerary, going from Turkey to Europe and aiming to rediscover common values, the kaleidoscopic beauty of Mediterranean landscapes and the joy of meeting and conviviality, is born from that star.